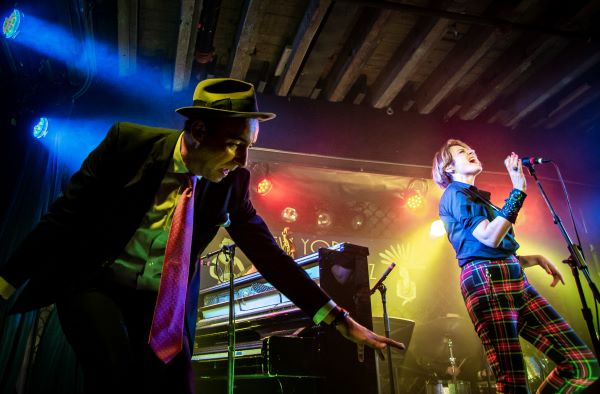 The Hot Sardines — the mischief-makers of hot jazz who started out playing underground neo- speakeasies in Brooklyn — have had a whirlwind last couple of years. The eight-piece (seven, with a tap dancer) has toured more than 250 cities throughout North America, Europe and Asia, blowing out their vintage-on- steroids sound to crowds as big as 25,000 at the Montreal Jazz Festival. They’ve hit No. 1 on iTunes Jazz, spent more than a year on the Billboard charts and racked up 20 million streams from fans in 90+ countries on Spotify. And it’s all come as a bit of a surprise to the band’s founders who bonded over a shared love of Fats Waller, at a jazz jam above a noodle shop in New York City.

“I wore out the grooves of my grandfather’s old Louis Armstrong and Ella Fitzgerald records as a teenager, but no way did I ever expect to at the Newport Jazz Festival one day, with my own band, playing those songs,” says co-founder and vocalist Elizabeth Bougerol, a London School of Economics-educated travel writer who grew up in France, Canada and the Ivory Coast. “Neither did I,” says Evan Palazzo, co-founder, pianist and onstage bandleader, a New York City-born and raised actor who studied theater at the University of the Arts in Philadelphia. “Elizabeth and I both grew up loving and learning early jazz, but once we met and started arranging tunes and playing for people, that was it.” “It just felt right,” adds Elizabeth. “It was like coming home.”

So when it came time to record a follow-up to 2016’s chart-topper French Fries + Champagne (Universal Music Classics/Decca), it’s that magic — and that journey — that they wanted to capture. “We wanted to record live. Everything in our DNA — where we started out, how we’ve grown — is about connecting with the audience. That’s where we feel most at home,” says Elizabeth. “And that’s where jazz lives,” adds Evan. “In the playing, in sharing that experience, in coming together to create a moment that won’t happen again.”

Welcome Home, Bon Voyage (MRI) captures the Sardines in two rooms, in two cities, in two countries: First at New York City’s intimate, immersive Joe’s Pub, and again at the acoustically-magnificent Koerner Hall in Toronto. The first barely cracks 200 seats, while the second packs in nearly 1200 fans. “At Joe’s there’s a small stage, no curtain, and everything is right there: The crowd can see the sweat, hear us all egging each other on — they feel like part of the band, and we feed off that energy,” says Evan. Adds Elizabeth, “But one of our favorite things is making an audience of 1200 feel just as close and connected as they would in a small room.”

The pair again tapped Eli Wolf (Robert Glasper, Elvis Costello + the Roots) to produce the new album, having found a real alchemy on their previous two studio recordings. “The Hot Sardines bring their signature swagger and musicianship to both venues,” he says. “They’re putting their personal modern stamp on musical gems from America’s past. The band possesses the rare ability to both entertain and educate, and their combination of reverence and irreverence is a delight to audiences of all shapes and sizes.”

Beyond the contrast in size, both rooms have significance for the New York-based band. Joe’s Pub (part of NYC’s Public Theater) is a gritty, groundbreaking venue known for taking chances on unknown artists they believe in —Amy Winehouse, Janelle Monáe and Adele are just three who played its tiny room long before they became household names — and in 2013, Joe’s booked the Sardines when the band was still busking in the subway. They sold out that first show, and every one since, returning to Joe’s whenever they’re not touring.

“What sets Joe’s Pub apart is the commitment they make to artists: ‘You’re part of the family. You can take risks here, you can grow here. Let us know how we can help,’” says Elizabeth. “That’s huge, as an artist, to hear that.” (No wonder Adele still does the occasional secret show at Joe’s Pub to showcase new material.)

Part of the Royal Conservatory of Music, Koerner Hall was an obvious setting to record in for a couple of reasons. Says Evan, “As we’ve been invited to play to larger audiences, the goal’s remained the same: To bring people together through music. Koerner Hall is one of the first truly big rooms we sold out when we first played there — we knew how magnificent the acoustics were, and we remembered what a phenomenal reception we’d received from the audience.” And the grandfather whose vinyl Elizabeth wore out? He was a jazz trumpet player who started pounding the Toronto pavement for gigs in the 1940s. Bobby Gimby eventually went on to become one of Canada’s most beloved bandleaders and receive the Order of Canada for writing the country’s centennial anthem, “Ca-Na-Da.” “Toronto was his home, the city that launched him into a life in music,” says Elizabeth. “I wanted to do something special for what would have been his 100th birthday, and recording in his home was perfect.”

The audience connection is palpable on Welcome Home, Bon Voyage, as the Sardines swing through a dozen jazz standards like you’ve never heard them before. From their modern twist on the syncopated, soaring “Everybody Loves My Baby” (written by Spencer Williams and Jack Palmer, and first recorded by Louis Armstrong in 1924) to an irrestistably dissonant take on Duke Ellington and Juan Tizol’s “Caravan” (a collaboration with Bill Elliott, the Tony-winning arranger who set the Sardines’ songs to music for a symphony show with the Boston Pops), the album also includes intimate numbers like the hushed, playful “Exactly Like You” and an interpretation of “Some of These Days” that turns Sophie Tucker’s 1910 trademark into a boisterous beguine. And in a nod to jazz’s roots and New Orleans’ 300th anniversary, the band finishes with a second line through Koerner Hall, turning the entire 1200-strong crowd into a Mardi Gras parade.

“These are times that need live music,” says Elizabeth. “And I don’t know of anything that brings people together, in these fragmented times, like the joy of hearing traditional jazz live.” Adds Evan, “It reaches fans who are 17 or 97, who speak English or Russian or Spanish or Japanese — it’s a joy and an honor to get to play this music around the world.”