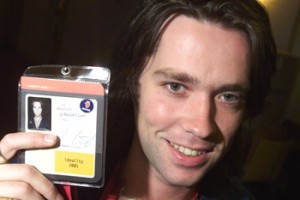 Rufus Wainwright has music in his blood. Born in New York to Canadian folk singer Kate McGarrigle and American singer-songwriter Loudon Wainwright III, Rufus began playing piano at age 6 and by 13, he was touring with his mother, sister and aunt.

In addition to his many albums of original music, Rufus has also written two full-length operas and composed music for numerous film soundtracks. He cites his early influences as operatic music, Edith Piaf, Al Jolson and Judy Garland.

Singer Rufus Wainwright joins us to perform a song and recite an original poem.