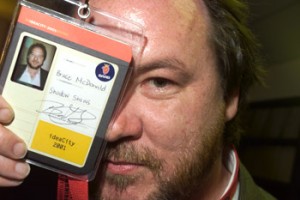 Rock and roll, comic books and bubblegum: these are the elements that are said to define director Bruce McDonald.

One of Canada’s most celebrated independent filmmakers, his fascination with science fiction movies as a child led him to create his own works with a Super 8 camera. After graduating with a degree in film and photography from Ryerson Polytechnic Univesity in Toronto, he worked in every type of film job, edited independent films for Atom Egoyan and Ron Mann, and then began working on his own films.

Roadkill was his first feature-length drama, followed by the films Highway 61 and Hard Core Logo. His most recent film is the upcoming Claire’s Hat, starring Juliette Lewis.

McDonald has also worked on television projects such as “The Rez” and “Twitch City” and music videos for such band as The Headstones and The Pursuit of Happiness. He was born in Kingston, Ontario.

Bruce McDonald -A Filmmaker's Journey to Meeting a Music Legend

Film director, Bruce McDonald, has brought something along with him, something he says saved his life...