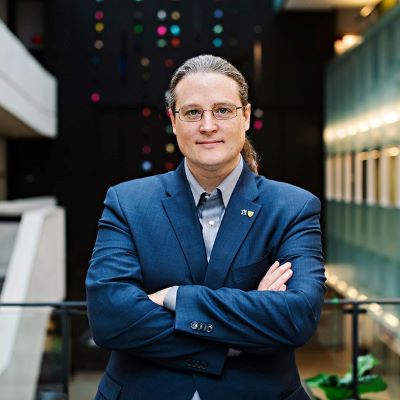 Avery Broderick is an astrophysicist who holds the Delaney Family John Archibald Wheeler Chair at Perimeter Institute for Theoretical Physics in Waterloo, Ontario. In April 2019, he and colleagues from the Event Horizon Telescope (EHT) collaboration unveiled humanity’s first glimpse of a black hole. The now-iconic image reveals the supermassive black hole at the heart of the M87 galaxy, 55 million light years away. Avery helped conceive the globe-spanning EHT experiment, which linked eight telescopes around the world with nanosecond precision, and his team at Perimeter Institute provided crucial analysis of the EHT data. Dr. Broderick is an associate professor at the University of Waterloo, and previously held positions at the Harvard-Smithsonian Center for Astrophysics and the Canadian Institute for Theoretical Astrophysics.